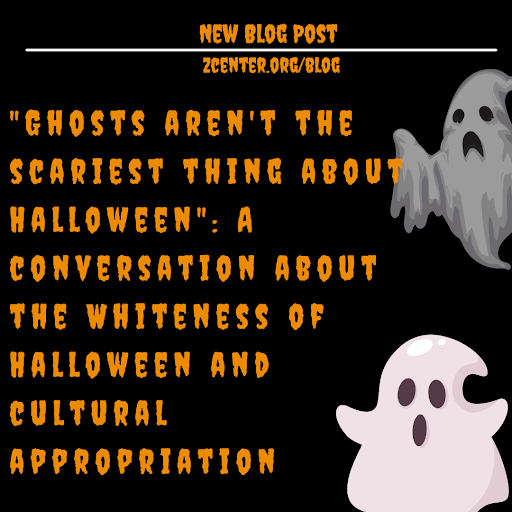 Most historians trace back modern day Halloween to the Celtic holiday of Samhain, which marked the end of the year for those living 2000 years ago in the UK, Ireland, and Northern France. The Celtic year ended on November 1, and so the night before (October 31) marked when the veil between the living and dead was the thinnest. When the Romans invaded Celtic lands in 43 AD, they adopted some and added some to these traditions. The Romans integrated the holidays of Feralia (a day in October where the living commemorated the dead) and the day that honored the Goddess Pomona (whose symbol was an apple, can you think of the tradition that stemmed from this?– maybe… bobbing for apples?). We also see the celebration of All Saints’ Day moved from May to November 1. Yet, we see celebrations that honor the thinning of the veil between life and death in almost every culture, such as Dia de los muertos, Borgo a Mozzano in Italy, Daimonji in Japan, and many more celebrations that have not been properly recorded by Western cultures.

So, how did we end up with Halloween that we know today? Well, like most things Halloween was brought to the United States by immigrants and then assimilated to better meet Western Standards. Halloween was not celebrated by the puritanical colonial settlers. There were harvest festivals where ghost stories were told as a way to teach moral lessons, but it was not until Irish immigrants fleeing the Potato Famine came to the United States that Halloween was celebrated as we know it today (coming from the words All Hallows Eve).

Other cultures, other religions, other identities are not a costume for you to wear.

Now it is time to have the conversation that we must continue to always have. Other cultures, other religions, other identities are not a costume for you to wear. Going as Pochantas wearing a headdress is offensive and invalidates the lived experiences of the horrors that indigneous people have faced at the hands of Americans. It is not okay to darken your skin tone to better “look like” a person or to have a more authentic costume. You are taking aspects of another person’s culture and identity and using it to your benefit with none of the threatening and scary implications that it means to be a person of a marginalized community in today’s society.

When you get home from a night out on Halloween, you can take your costume off and be safe and privileged. So while you have the time of your life wearing a headdress or a sombrero or your cornrows to imitate your favorite rapper, Black and Brown Children in Milwaukee have to trick-or-treat when the sun is still out, so that they are safe and can make it home.

Here are some questions to ask yourself about your costume: Does the culture you’re imitating have a history of oppression? Are you benefiting from borrowing from the culture? Are you able to remove something when you get tired of it and return to a privileged culture when others can’t?

In Northbrook, Ill., Jess Lifshitz has her fifth-graders take a letter home. She explained to NPR that, “A couple of years ago I noticed that every Halloween, there were one or two kids who came in costume and for whatever reason the costume just made me uncomfortable and I worried it made others uncomfortable,” because it portrayed a stereotyped image of a group of people or it was someone dressing in a way that almost seemed as if they were putting on the identity of another person as a costume.

It may seem like a light-hearted matter, a once-a-year thing, but it is not. People die world-wide every year wearing their cultural clothes and fighting to be their authentic self for things that they cannot, nor should have to, change about themselves. So when you wear clothes that other people have been murdered for wearing you are disrespecting their legacy. Please think this Halloween of the people who have longed to show their truest forms of identity, but have not felt safe, nor allowed to do so.

Read these articles below for ideas on non-offensive Halloween costume: