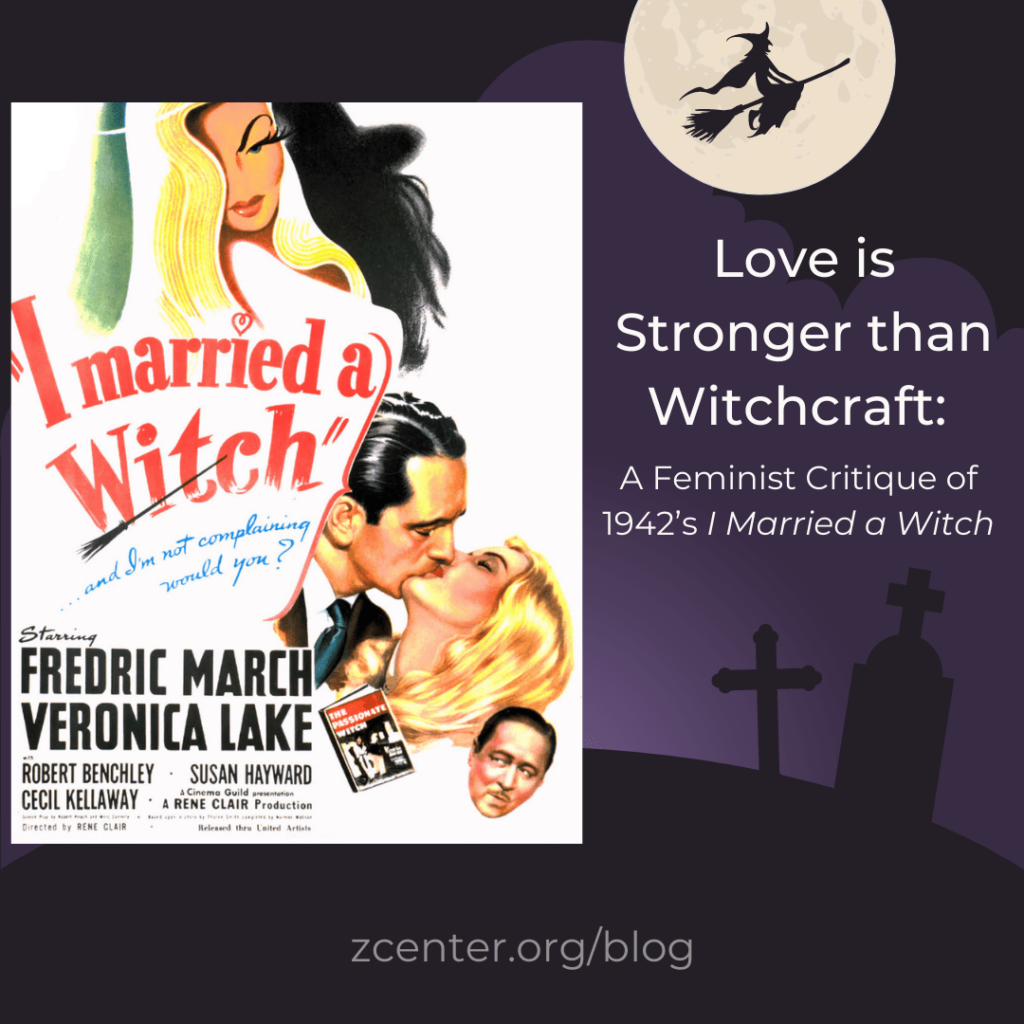 Author’s note: Although I refer to characters as men and women or male and female, I do not intend to uphold the false binary of man/woman. This is only a stylistic choice based on the beliefs and cultural milieu of 1942. 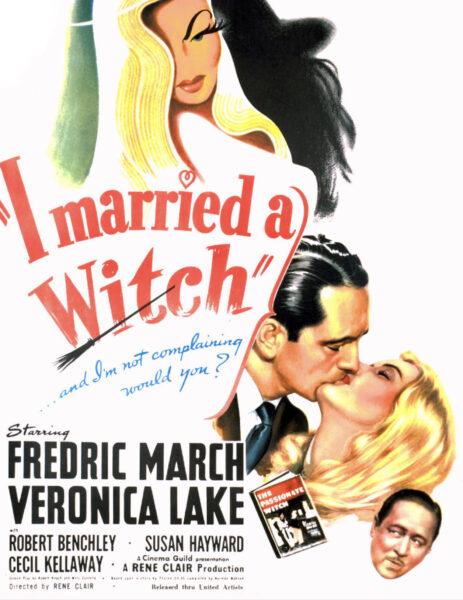 I Married a Witch (1942) is a rare fantasy/romantic comedy that gives us a glimpse of the patriarchy of the time alongside the agency of two female characters. We meet Jennifer,* a 17th Century witch, killed in a witch burning by local Puritan authorities. She and her father remain trapped in a tree’s roots for nearly 300 years, only to escape and meet Wooley, the descendant of the man who murdered them. Jennifer tries to seduce Wooley for payback, knowing his wedding is the next day. In a mixup with a potion, Jennifer becomes the one enamored and falls deeply in love with Wooley. Estelle, Wooley’s fiancée, ends up leaving Wooley at the altar after her father attempted to force her into the marriage; Jennifer wins her man only after her own father tries to interfere.

“Any man who marries, marries the wrong woman.”

What struck me initially about the film was the patriarchy bordering on misogyny. Daniel, Jennifer’s father, claims that “Any man who marries, marries the wrong woman.”  We also see that Wooley’s fiancée, Estelle, is labeled as a shrew for not smiling and not being complacent and weak; she also asks Wooley to stop smoking and drinking at various points in the film, obviously not the actions of the ideal meek and complacent housewife. Both female characters are told by their fathers who they can or cannot marry; Estelle is nearly forced to marry Wooley and Jennifer’s father takes away her powers to stop her from marrying him. Women are the property of men, whether it is their father or their husband, and that property is only referred to as girl. Wooley himself refers to both Jennifer and Estelle as girls.

“That’s a good girl … Poor little girl, all alone in the world.”

Is the patriarchy just a sign of the times, a leftover from when the norm was to see women as second-class citizens? I don’t think we should overlook the patriarchy, nor the oppression, not when so many lives are impacted. The only person of color in the entire film is a slave from a flashback to the Revolutionary War. White privilege is normalized and never questioned. There also is no responsibility taken for generational oppression. Wooley is portrayed as “the good guy” with no acknowledgment from his character nor the film about how his ancestor burned witches. All of his wealth and socioeconomic status are built on the oppression of others.

Despite this context, we do see some agency from the female characters. In a world where white men hold all political and economic control, where women’s lives are controlled by men’s decisions, the two female characters still find some agency. Jennifer and Estelle’s fathers both try to control who they marry, yet both women are able to forge their own matrimonial path. Estelle walks out of her own wedding ceremony and Jennifer chooses to marry Wooley despite her father’s meddling. By the end of the film, we see Jennifer’s ultimate act of agency; she traps her father’s spirit in a bottle while she enjoys building a family with Wooley.

But we also see that Jennifer and Estelle internalize this oppression. Jennifer’s immediate concern once she is back in a human body is her appearance. She wants to make sure her appearance pleases Wooley. In the final scene, Jennifer and Wooley’s daughter plays on a broom, much to the disappointment of the housekeeper. Jennifer says, “I’m afraid we’re going to have trouble with her someday.” She herself had agency to make her own choices, but chastises her own daughter for claiming that same agency and finding joy in a tool of witchcraft. The film ends with Jennifer knitting while children encircle her. The acceptability of a powerful woman into fine society comes at a price. She must trade in her broom for needles, serving those around her as she knits them sweaters rather than flying through the night sky.

In a rare moment of clarity, the film hints at the importance of consent. Wooley forces water into Jennifer’s mouth when she has passed out and his friend offhandedly comments that “You should never force liquids on a person who is unconscious.” Writers were 80 years ahead of the tea video.

“You should never force liquids on a person who is unconscious.”

Jennifer gets what she wants in the end: marriage, children, and domestic quietude. But at what cost? She repeatedly claims that “love is stronger than witchcraft,” but it was her witchcraft that allowed her to have agency, powers, and choices. She could speak her mind as a witch. She could fly on broomsticks and light fires merely by speaking. She gave all of that up to “be a good housewife.”

Had I been alive at the time, would I have gone to opening night of I Married a Witch on October 30, 1942? Of course. I would have made it a date night too, because love is stronger than witchcraft. But if there is a love that confronts oppression, racism, patriarchy, misogyny, and lack of consent, then maybe I’d rather have that love.

*The name Jennifer was not in use in the 17th Century, but we will forgive the writers who did not have Google at their fingertips in 1942.