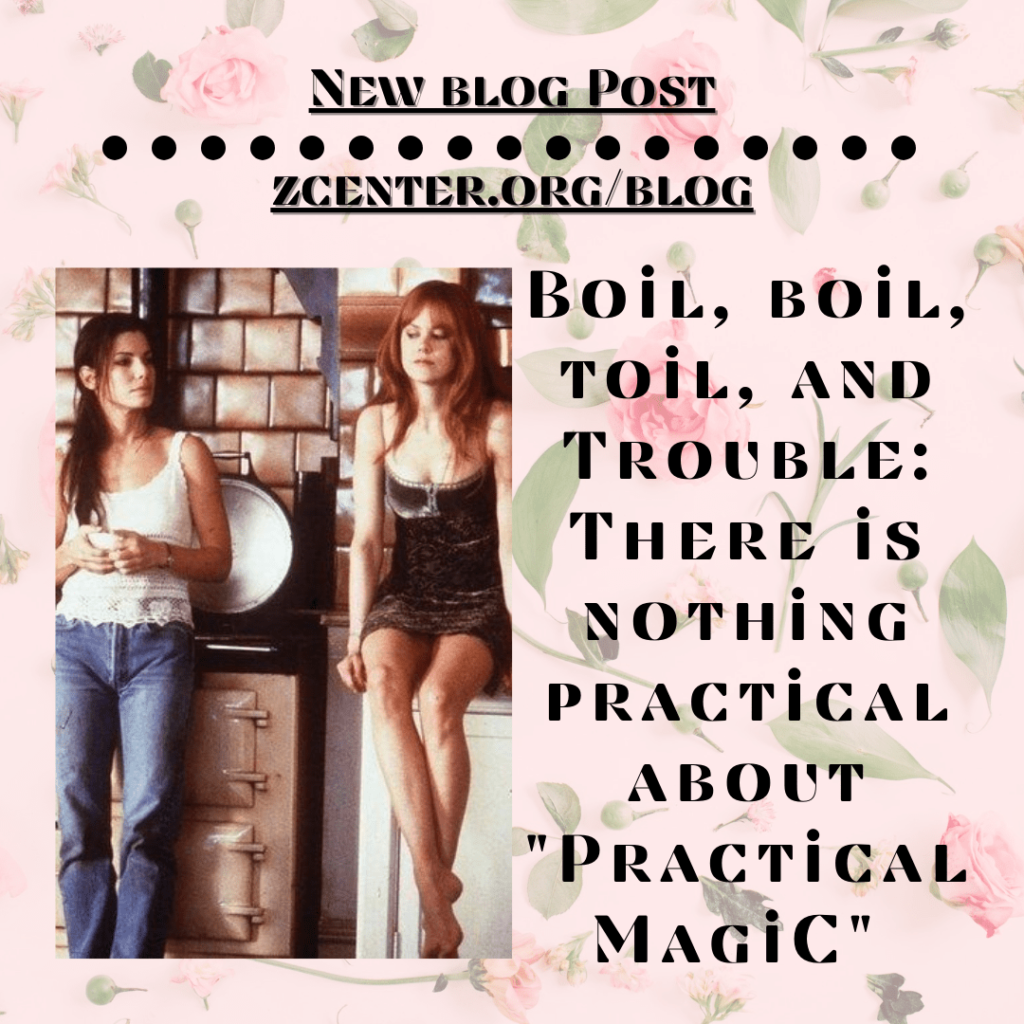 I have had a Pinterest board dedicated to Practical Magic since I saw it many, many years ago. The fashion, the hair, the HOUSE, I wanted that life. It was my dream to live my life on an island off the Massasschust coast, in that house, brewing and gardening.

This is the story of a long line of witches. After being exiled to this island with her unborn child, Maria — an ancestor of the Owens sisters who are the main characters of the movie — casts a spell to stop herself from being able to fall in love because her lover never came for her. Shortly after, Maria falls dead from heartbreak and the curse is passed on through the generations. The men that the Owens women love are destined for death.

The story picks up with the introduction of Sally and Gillian Owens. The two sisters  have recently moved to their ancestral house with their aunts because their father has suffered the fate of the curse and their mother has died of heartbreak. In this house, they are encouraged to do their magic, eat chocolate for breakfast, and to feel things profoundly.

One night, a very upset woman comes to the door. She says that the love of her life loves another and she wants the aunts to cast a spell to make him love her. After watching this, Sally and Gillian react differently. Sally says that she hopes never to fall in love whereas Gillian can’t wait to fall in love.

Flash forward and Gillian goes off into the world, leaving behind a string of broken hearts. Thanks to a boost from her aunt, Sally who vowed to never fall in love, but with a boost from her aunts, she falls in love with a local man and they have two daughters. Unfortunately, Sally is not immune to the curse; her husband ‘Michael dies and Sally moves back into the aunts’ house.

Meanwhile Gillian is partying in Arizona, where she meets Jimmy Angelov. One night Gillian calls Sally in a panic; Jimmy has been abusing her and she needs Sally to come. Sally slips him too much Belladonna, and he dies. Rather than LEAVING HIM DEAD, they decide to cast a spell that tries to revive him (SPOILER: it does not work), and then the real antics begin.

So what does it all mean? And how in the world is Practical Magic related to feminism and ending sexual violence? I think the best way to start is with the chant that is almost like a nursery rhyme in this town. It is so common that a group of elementary school students are singing it….“Witch, witch, you’re a b***h. To which Sally says, “You’d think in 200 years they would have time to come up with a better chant.” It shows that women outside the norm are typically viewed as witches, seductresses, and dangerous. Women who are strong, women who may not want children, women who love freely are viewed — and have been viewed through much of history — as witches and have suffered such fates as being burned alive.

This movie clearly passes the Bechdel test, which determines how feminist a movie is. This test has three basic rules: it has to have at least two women in it, they have to talk to each other, and they have to discuss something besides a man. It seems like a pretty simple task, but you would be surprised by how few movies actually pass this test.

As well, it shows us that there is more to being a femme-identifying person because you have the Aunts: one kind, one mischievous; you have Sally, calm and powerful; and then you have Gillian, liberated and loyal. This also works to create a movie of empowering female relationships. It is not that these women do not fight with each other (oh, they do). Rather than this movie making you go “ah women, so petty,” it shows you how strong the female-identifying bond can be.

This bond is so crucial to the movie that when Gillian becomes the victim and survivor of Domestic Abuse, it is the sisterhood and the coven bond that protects her. And as October is Domestic Violence (DV) Awareness month, it is important to showcase how DV truly affects women. Practical Magic highlights this experience and shows Domestic Violence survivors who experience more than just physical abuse.

So, where does this leave us? It leaves us with a movie that praises sisterhood and female bonds. It leaves us with hope that the magic inside of us does not make us evil or outcast, but rather we must find our own coven that respects and honors our magic.