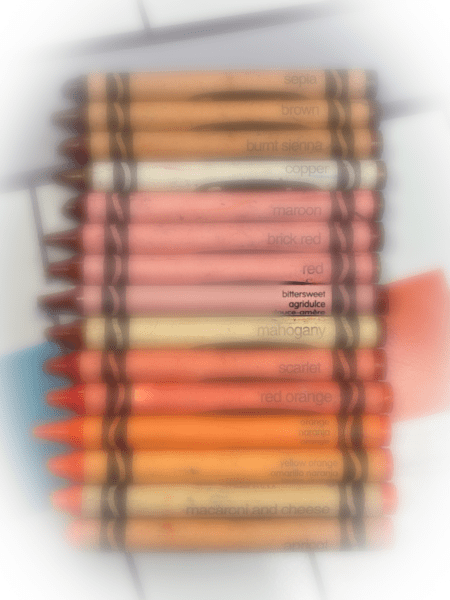 I remember the first time I saw the agridulce crayon, the bittersweet. As my kids colored in a coloring book, I paused and reflected on this odd word that combined such opposite sensations. Perhaps it was because I was reading the Spanish, looking at language as a learner. Perhaps it was just that I loved the color and wanted to connect to this new word I had learned, as I soaked in the comfort of this interesting brown-orange-red shade.

Linguists have found that red and brown were once the same color in many languages. In fact, red is one of the first colors that languages use; other colors come much later as the language evolves (Deutscher, 2011). There is something primeval about red-brown. Was the biblical red heifer really brown, and ancient Hebrew just did not have that word yet? Did other cultures look around them and see red soil, red cows, and red tree trunks? Or did they just not have the word brown?

I ponder these types of questions because it brings me joy to think about linguistics. But language was also a struggle for me as a child, even requiring school intervention for speech therapy. It’s a bittersweet topic; it’s agridulce.

As we enter Pride Month, I feel the same sense of agridulce, the bitter and sweet, as we think about Pride activism. ZCenter is participating in three pride events this month to celebrate the LGBTQIA community. We share in the joy of colorful decorations, music, parades that are drives during a pandemic, and youth who are taking the initiative to organize and facilitate. But we also bring with us the reality that so many youth in the LGBTQIA community are vulnerable.

As we hold up our rainbow flags, sing along to the parade playlist, and post our allyship memes, may we carry this feeling of agridulce as inspiration. We have so much to celebrate, so much joy to embrace. We have visions of equity, dreams of diversity. May that be what we are fighting to preserve.

Deutscher, G. (2011). Through the Looking Glass: Why the World Looks Different in Different Languages. Picador.