“Just 25 years ago, sexual harassment was considered a radical-fringe by-product of feminist theory. Today it’s embedded in multiple Supreme Court decisions, thousands of corporate policies and a host of lower-court cases that have spread like kudzu across the legal landscape.” (Waxman, 2018)

We often talk about what defines sexual harassment, but rarely do we have such a public case to demonstrate the concept. Here is a walk through what we’ve seen over the last couple of weeks with Andrew Cuomo:

“[E]ven the Governor’s less overtly sexual comments that were nonetheless gender-based, also created a hostile work environment. Although the Governor (and certain of his senior staff) sought to downplay what the evidence has revealed as frequent gender-based comments and conduct by the Governor as simply ‘old fashioned’ or ‘cultural,’ neither explains nor justifies his behavior, nor makes it non-harassing. For example, referring to female staff as ‘honey,’ ‘sweetheart,’ and ‘darling,’ kissing staff members on the forehead and some of the senior staff on the lips, holding them tightly around the waist for pictures and other occasions, allowing senior staff members to sit on his lap at official functions, and lying down with his head on the lap of staff members who are women we find, based on our interviews with numerous Executive Chamber employees, did in fact create a hostile work environment for many staff who were women. As a matter of law, claiming that the gender-based behavior is simply a function of being oldfashioned or culturally more affectionate is not a defense to sexual harassment.” (p. 148)

Quid Pro Quo, however, is a whole different ball game (pun intended). Most of us are more familiar with the political quid pro quo engaged in by the former president, i.e. withholding military aid for a political favor (see Torres, 2021). Sexual harassment quid pro quo, or something for something, involves a person in power (a manager, supervisor, or other authority in the workplace) offering to give an employee something, such as a raise or promotion, in exchange for some sort of sexual favor. Cuomo, as of this publication date, has not been accused of quid pro quo related to sexual harassment.

One of the biggest lessons to learn from the Cuomo story is that compliance is never consent. Women who worked below him endured his inappropriate comments and touching, which is not the same as consenting. Consent is a positive affirmation that the behavior is welcomed. In Illinois, we require affirmative consent for sexual activity.

Not a Generational Difference

Cuomo both minimized and distanced himself from the wrongdoing (see Leopold, 2021). He described that there was a “generational difference” and that “the rules have changed” (Wagner et al, 2021). Inappropriately touching women and using sexualized language in the workplace have never been good behavior. Women complied over the years to keep their jobs. Women are speaking up more now and more people are listening to them. No one changed the rules; no one ever told Cuomo’s generation they could grab women in the workplace.

Sexual harassment may have been considered a fringe area of feminist theory 25 years ago, but only because patriarchy was the norm. Cuomo chose to live in his patriarchal world of sexual harassment, but that was a choice. No one changed the rules on him. He just realized that he hasn’t been listening.

Both creating a hostile work environment and quid pro quo are illegal. You are protected by state and federal laws. 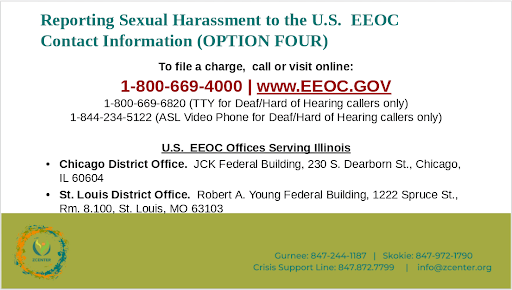 If you or someone you know has a question about sexual harassment, please contact your local women’s center, rape crisis center, or sexual abuse center. If you live in Lake County or Northern Cook County in Illinois, feel free to contact ZCenter with any questions about your rights or reporting. We also offer a Workplace Sexual Harassment Prevention Training, now required for all state employers to offer. Contact us for any questions about scheduling or pricing.

Most of all, take care of yourself and your coworkers. We all deserve a safe and non-hostile work environment.

Leopold, L. (2021). New York Gov. Cuomo is the textbook example of how not to apologize. Theconversation.com https://theconversation.com/new-york-gov-cuomo-is-the-textbook-example-of-how-not-to-apologize-156474