My obsession with Taylor Swift began in seventh grade when “Love Story” hit number one on the iTunes music chart. At the time, Taylor Swift was a rising star in the country world. Even back then, she was known for her talent for using her lyrics to piece together stories that resonated deeply with the listener. As her stardom continued to rise, I devoured every album she put out, my love for her overriding my heartbreak after hearing she was dating my first celebrity crush, Joe Jonas.

Yet as the years passed, I noticed a distinct change in the way the media (and my friends) began to talk about her. The media honed in on her love life, and the love songs once heralded as vivid storytelling became symbolic of her man-hunting and “desperate” ways. Swift even wrote a (brilliant) song about this – “Blank Space” – a tongue-in-cheek depiction of her character if she truly was who the media portrayed her to be. Despite Swift’s satirical lyrical responses and good-natured “shaking” off of this barrage of criticism, the narrative she was ascribed to never should have happened.

Swift is by no means the first celebrity to have her love life intensely scrutinized in a way that overshadows her work and reduces her to a “girlfriend,” but she should be the last. Generalizing her songs and casting her aside as a songwriter that just “writes about love songs” is hypocritical and anti-feminist. Her male counterparts objectify women and sing about their romantic woes on a similar basis yet are not subject to the same criticism Swift receives. But even more egregious is that such criticism boils down to the deeply rooted belief that women should not be able to speak about their feelings. Dwelling on one’s feelings and (gasp) verbalizing those feelings can cast women as “crazy.” It’s ok to feel “happy, free, confused, and lonely at the same time.” Emotions are meant to be felt and shouldn’t be stigmatized. Dismissing someone as “too emotional” perpetuates the toxic belief that being in tune with one’s feelings is weak and shifts the focus away from what caused them to feel that way in the first place.

Swift has had a busy couple of years, re-recording the albums she released while under Big Machine Records. What Taylor Swift is doing with her re-recording is nothing short of badass, but it is an unfortunate consequence of her not being afforded the rights to purchase back the masters (i.e. master recordings) for the songs that she wrote. It is disheartening that some people have dismissed her struggle, stating that she should have known better than to sign the contract that gave away the rights to her masters (a contract she signed when she was fifteen years old). These individuals fall into the trap of accepting the status quo—just because the music industry has operated in this predatory way for years does not mean that it should continue to subject young, impressionable artists this way. Their equivalent of a “suck it up and move on” devalues Swift’s lifelong work to a bad business decision. It’s not just a cost of doing business when the said business is one’s life—and Swift has every right to fight and have ownership of her creative works. 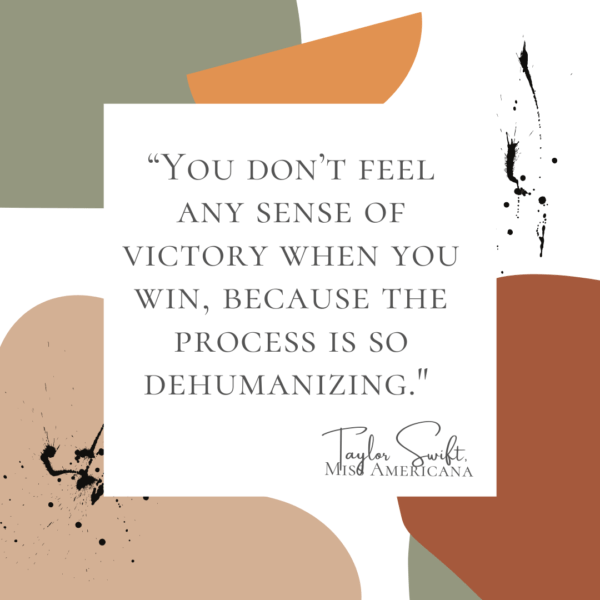 Taylor Swift also made headlines in 2015 when former radio personality David Mueller filed a defamation lawsuit against her. Two years prior, Swift’s team reported to his radio station that Mueller had put his hand under her skirt and groped her during a pre-concert photo opportunity. Swift countersued, alleging assault and battery, asking for a symbolic $1 in damages. During the trial, Swift remained steadfast despite demeaning and patronizing questions by opposing counsel. When rejecting a suggestion that she had misidentified Mueller, she asserted: “I’m not going to allow you or your client to say I am to blame.” When presented with a photograph capturing Swift with Mueller and asked why the front of her skirt was not raised, she remarked: “Because my ass is located on the back of my body.” When asked about the defamation charges that caused Mueller’s “humiliation,” she retorted: “I’m being blamed for the unfortunate events of his life that are a product of his decisions, not mine.” Swift ultimately prevailed, but in her recent documentary Miss Americana, she reflected: “You don’t feel any sense of victory when you win, because the process is so dehumanizing. This is with seven witnesses and a photo. What happens when you get raped and it’s your word against his?”

Swift’s experience of sexual assault matters. Her candid remarks about the emotional damage she suffered as a consequence of it matters. Each and every individual who undergoes a similar experience matters. Swift’s trial and her subsequent comments showcased one of the most famous women in the pop world in one of her most vulnerable moments. Most importantly, it placed the issue of sexual violence on a nationwide stage, helped combat the stigma of talking about sexual assault, and shed light on its accompanying life-long impacts.

And by morning, gone was any trace of you, I think I am finally clean – “Clean”

It would be remiss to fail to mention that Taylor Swift is a rich, white woman that fits societal standards of beauty. She clearly possesses privilege, and she is by no means perfect (nobody is!). But what she does demonstrate through the media portrayal of her is that there is still a desperate need for a cultural shift when discussing women and their work.

ZCenter aims to end sexual violence, mobilize and educate the public, and support survivors of sexual assault. Our blog addresses issues related to ending oppression and violence, since all oppression and violence are intersectional with sexual violence. All ZCenter blog posts are written by state certified staff, interns, and volunteers. For questions on authorship or content, please email kjones@zcenter.org.