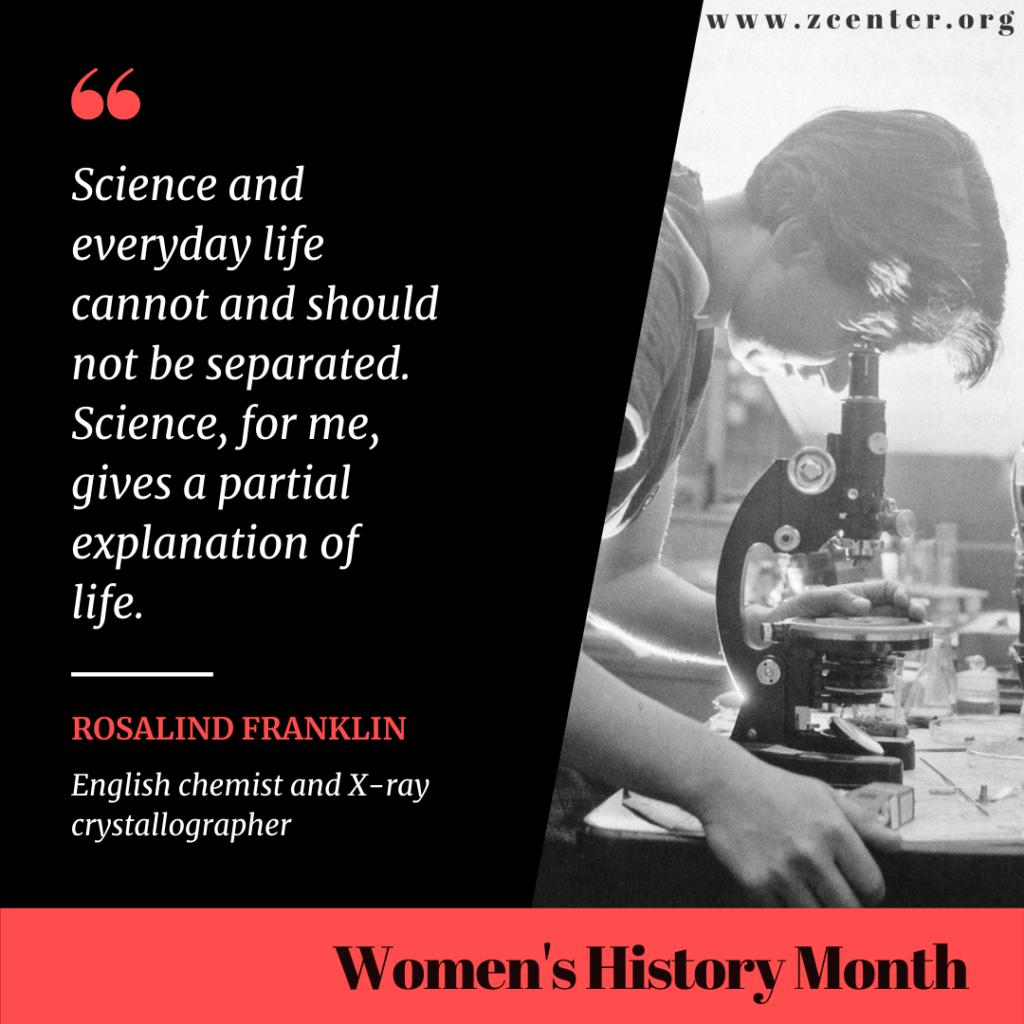 The month of March is Women’s History Month and so we are focusing on forgotten voices of women throughout history. This week, we’re highlighting the work of an incredibly influential woman who is only spoken of briefly in biology courses despite her huge accomplishments. Seventy years ago, a young Rosalind Franklin looked over an X-Ray photograph and discovered something that would go on to change how we understand life. This discovery eventually led to a university here in Lake County, IL being named after her. Unfortunately, even though her legacy lives on locally, she also got the very raw end of the deal when it comes to her own discovery.

Franklin was born in Notting Hill, London in 1920. At the beginning of her life, her family noticed how quickly she had picked up a love and understanding of maths and sciences, her intelligence even surpassing those subjects and eventually mastering the French, Italian, and German languages. It was only at the age of 16 that Franklin began to dedicate her time to science entirely. Majoring in physical chemistry at one of the only women’s colleges, Newnham College at Cambridge University, Franklin immediately went on to work as a research assistant with the British Coal Utilisation Research Association (BCURA) after her bachelor’s degree. At BCURA, she studied the absorption of coal and the research she did eventually led her into her dissertation for her doctorate degree in 1945.

After earning her doctorate, Franklin was accepted into a position at Paris’ Laboratoire Central des Services Chimiques de l’Etat, where she worked on X-Ray imagery, leading her to her primal discovery just a short few years later in 1951. While studying DNA structure with assistant Raymond Gosling, Franklin discovered that DNA had a double helix structure in a photo now branded Photograph 51, serving as the evidence for the new understanding of DNA. Unfortunately, a colleague showed this photograph to James Watson, who took the evidence to further prove his and Francis Crick’s own research on the structure without Franklin’s permission. They went on to publish a paper on the structure of DNA with no credit given to Franklin, despite her photograph being a prominent factor of evidence.

Franklin continued on to new areas of research, publishing a number of papers on viruses in the five years after her discovery. The impact of her work helped build many foundations of understanding viral structure, which was incredibly important to physiological research. Still, Watson and Crick went on to receive a Nobel Prize in Physiology and Medicine years after Franklin’s death from ovarian cancer in 1958, giving no credit to Franklin.

Rosalind Franklin is only one account of women’s voices being lost within the larger influence of men, having not been acknowledged for this contribution until after her death, and while it may not be the last, there is power in recognizing those lost voices. This month we have highlighted multiple women that paved the way for so many others in history. Join ZCenter as we strive to keep these voices alive while raising up the voices of women today. 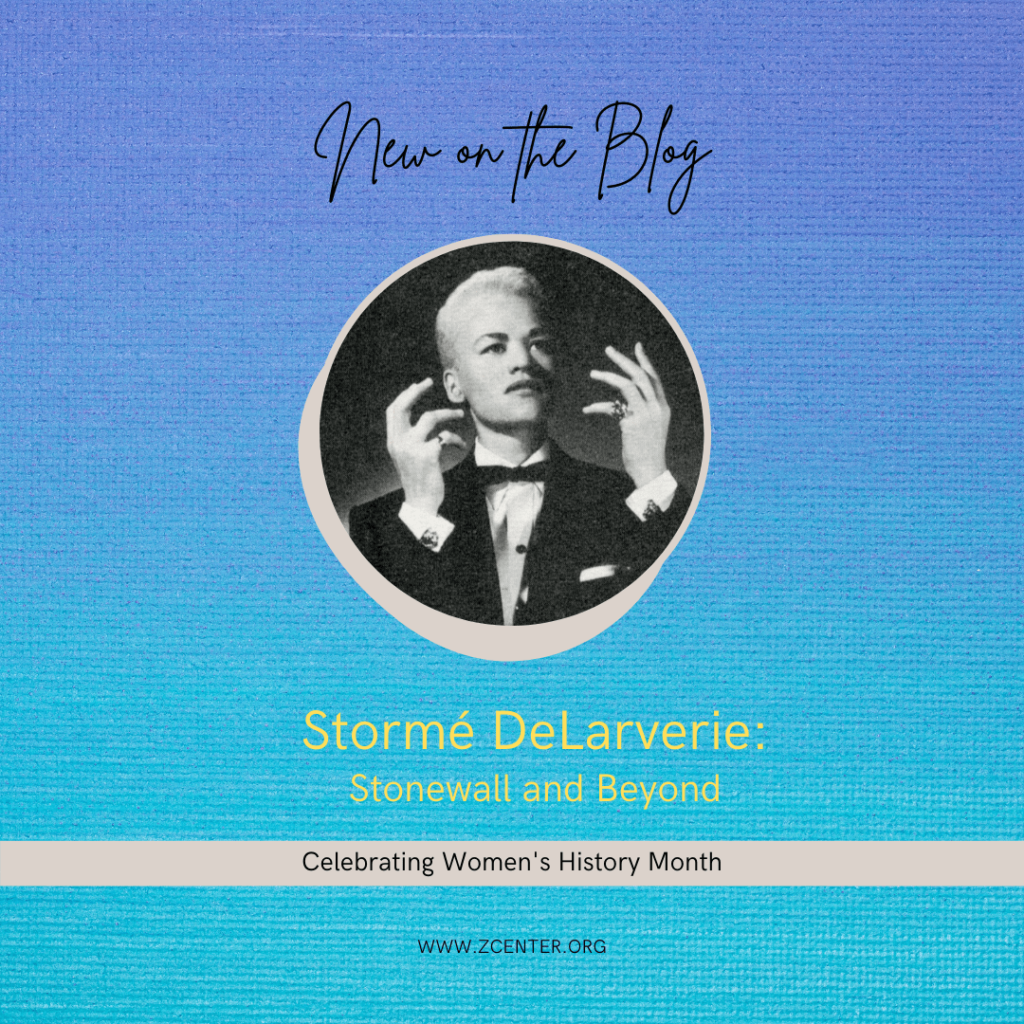 It was a rebellion, it was an uprising, it was a civil rights disobedience – it wasn’t no damn riot.

This Women’s History Month, we celebrate the life of Stormé DeLarverie, and although recounts of Stonewall are uncertain of whether Stormé threw the first punch, she was extremely influential in fighting for LGBTQIA+ rights throughout her life. Stormé was born in the 1920s; at the time, her mother was a Black servant in the home of her white father; the two eventually married and moved to California.

Stormé was the Master of Ceremonies for Jewel Box Revenue, a group of 25 men and Stormé which entailed a gender-bending performance where Stormé presented as a cisgender man in the first integrated drag show in the U.S. in the 1940s. Stormé was a butch lesbian who fought fiercely for the rights of all individuals. While living in New York City, Stormé became a motherly figure within the LGBTQIA+ community, being sure to handle any “ugly” she saw. She used the term ugly to define bullying, abuse, or intolerance of people within the LGBTQIA+ community. This fearlessness afforded Stormé the nickname of being the “Rosa Parks of the gay community” (Windy City Times, 2014). Throughout her life, Stormé was also a bouncer at Cubby Hole’s bar in New York, where she worked until she was 85. For Stormé, this was not a movement but fighting for a lifestyle where everyone could live their life freely as they wanted to.

In the New York Times obituary remembering Stormé, one of her legal guardians, Mrs. Cannistraci exclaimed, “She literally walked the streets of downtown Manhattan like a gay superhero; she was not to be messed with by any stretch of the imagination.” We hope to emulate the same fierceness that Stormé had throughout her lifetime in our work supporting survivors and ending sexual violence against all individuals. 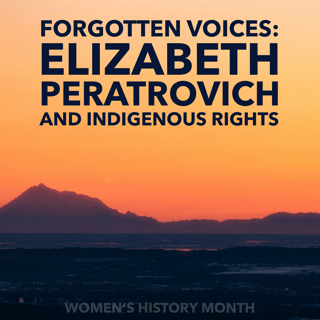 This month we are focusing on forgotten voices of women who have made great change and impacted society in a unique way, whose accomplishments have been overlooked. Elizabeth Peratrovich advocated for civil rights, particularly for the Indigenous population and played a huge role in creating the first anti-discrimination bill in the United States.

Elizabeth was born a member of the Tlingit nation in 1911 in Alaska; at a young age she lost both her parents, was adopted by the Wanamakers, and given the name “Elizabeth Jean.”. Throughout her life there was blatant discrimination against the Tlingit nation in the territory. Indigenous people were limited on where they could receive medical care and go to school, even which dining establishments they could go to. There was also hatred shown towards Indigenous people from the white population in the area. From signs saying ‘No Natives allowed’, ‘No dogs, no Natives’, to ‘We cater to White trade only’, discrimination was inescapable.

A few years after marrying Roy Peratrovich, also from the Tlingit nation, they moved to Juneau; this was where her fight for equal rights became regionally recognized. She wrote to the elected governor about the sign ‘No Natives allowed’ that she and her husband had stumbled across, expressing her outrage that it would exist after World War II. Elizabeth gained the support of Governor Gruening for an anti-discrimination law, but the first time they tried to pass the bill in Alaska in 1943, it did not pass the House. Elizabeth toured around Alaska working to gain support from fellow Indigenous people to ensure its passing the second time. In 1945, the anti-discrimination bill was re-introduced, and was the first of its kind to passed by the senate in an 11-5 vote. This bill called for entitlement to equal enjoyment of services and establishments. For example, restaurants, roller skating rinks, bathrooms, and transportation are just a few that were specifically listed in the bill. Elizabeth was a huge reason why this anti-discrimination bill was passed when she gave pivotal testimony stating,

“”Have you eliminated larceny or murder by passing a law against it?” Peratrovich asked matter-of-factly. “No law will eliminate crimes, but, at least, you as legislators can assert to the world that you recognize the evil of the present situation and speak your intent to help us overcome discrimination.” (Bohi, 2009)

This anti-discrimination bill created a invaluable guide on future bills to come in the Civil Rights movement in the 1960s. While Elizabeth did pass away in 1958, she was an inspiration that proudly raised her voice and acted against discrimination not only for herself, but other Indigenous people as well. In 1988, Alaska legislature deemed February 16, the “Annual Elizabeth Peratrovich Day” in honor of her fight against discrimination, and she is still recognized to this day. Elizabeth was brave to speak against discrimination in that time, and paved the way for many others to come. 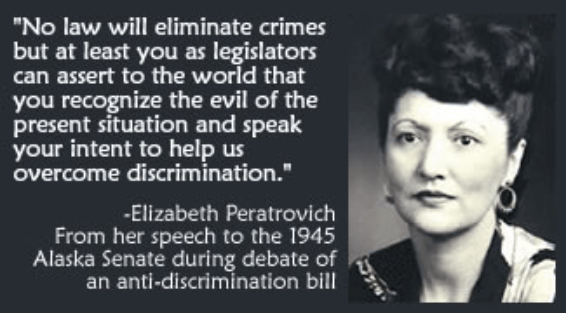 Weingroff, R. (Updated 2021). “Who Is Elizabeth Peratrovich? The story behind the country’s first anti-discrimination law”. Retrieved from https://www.fhwa.dot.gov/highwayhistory/peratrovich.cfm.

In honor of Women’s History Month, the March blogs will focus on forgotten voices of major women figures throughout history. This week, we highlight only a few women writers who too often go unnoticed in a literary world dominated by the cisgender white male voice.

Enheduanna, two millennia before the Christian messiah, grasps the lapiz lazuli around her neck, takes in the night sky, and writes her soul into poetry as she honors the goddess Inanna. She gazes toward the Gate of Wonder as hymns to the Queen of Heaven and Earth flow onto her clay tablets (De Shong Meador, 2000). A woman, writing praise to a goddess, suspends her own place as one living under the shadow of her father Sargon. In an ancient world dominated by warring men, Enheduanna, the first known female poet and first known author by name, writes her own world.

Spreads radiance over the land

As male Babylonian warriors siege Jerusalem, Sappho centers the 6th Century BCE Mediterranean world on Helen, Hera, Hermione, Hékate, and Aphrodite (Sappho, 2007). Sappho’s poems remind us that we can re-center the narrative; the story becomes what we choose.

But stand before me, if you are my friend,

and spread the grace that’s in your eyes.

Like a child to her mother I have flown to you.

In 17th Century Mexico, Sor Juana Inés de la Cruz was a prolific writer in her matricentric world, even referred to now as a protofeminist and ecofeminist (Yagar, 2014). Centering her poetry in the Nahua people’s cosmic worldview, Sor Juana challenged the gender inequalities of her time. Of particular interest is her poem Hombres Necios, in which she describes the hypocrisy of men who demand that unmarried women are virgins, when it is the same men who take that virginity.

without seeing that you’re to blame

for the very thing that you accuse

As we work to end sexual violence, we carry a torch that was lit many millennia ago by brave, autonomous women like these three writers. In their poetry, may we find the inspiration to continue to fight oppression for all.