Although we have an understanding of the importance of mental health awareness in the month of May, we need to differentiate minority mental health in July to signify the intricate hardships that minorities may face from stereotypes, sexism, systematic oppression, and classism. The objective is to accentuate the attention that needs to be considered for minorities battling mental health adversities. Mental health disorders do not discriminate against age, gender, race, ethnicity, or identity. The unfortunate reality is that we need to focus on emphasizing mental health for various minority groups. Additionally, individuals who need mental health assistance contributes significantly to sexual assault statistics at staggering numbers. Even more so when investigating minority groups.

The Context of Minority

A person who identifies as a minority is one who does not consider themselves a part of the dominant culture in society. Who might be a minority? Well, it can simply be anyone whose identity does not align with white, higher income, male, heterosexual, Christian, and able-bodied individuals. The word minority also may represent the differential of power between majority and minority groups alike, and can make individuals who identify with such groups feel a sense of inferiority compared to those of the dominant culture (Bryant-Davis et al., 2010).

Why Does Minority Mental Health Matter?

According to the American Psychiatric Association, gay men experience higher levels of risk of adverse health problems such as mood disorders, suicide, substance abuse, and anxiety (Messih, 2018). This can become problematic if individuals who need proper mental health care feel as if barriers are hindering them being able to have access to quality care. Furthermore, there are conceptualizations in unrepresented communities about causes and cures of mental illness as well as the stigma that follows being diagnosed with a disorder. The purpose of minority mental health awareness month is not meant to imply that the dominant culture’s mental health is not a priority, but rather that we need to acknowledge the auxiliary attention that must be presented to promote quality mental health care for people of unrepresented communities. Although there is treatment for those with mental health disorders identifying as a minority, there are many barriers to receiving accessible and proper mental health care.

Barriers to Seeking Mental Health Care May Include:

Generally, we see an increase of minority and sexual orientation groups have higher levels of anxiety, depression, suicide ideation, and many other mental health disorders due to societal traumas and factors. According to SAMHSA (2010), over 70% of African American adolescents diagnosed with major depression disorders did not receive treatment for their condition. In relation to sexual assault,  it is evident that the crime can increase the likelihood for developing a mental health disorder. More specifically, survivors of unrepresented communities underutilized treatment and care. Women may not be able to seek out assistance to alleviate the distress caused by sexual assault with possible consequences of victim blaming due to racism, classism, sexism, and other forms of systematic and societal trauma.

Sexual assault on minorities with those of mental health disorders has become an epidemic due to the lack of knowledge of resources and cultural barriers for individuals seeking help. In addition, the prevalence of negative outcomes following from sexual assault demonstrates that it is common for women to develop serious mental health challenges after being sexually assaulted. Research suggests that there is a disproportionate amount of sexual assault among underrepresented people, and with lack of proper mental health care can be detrimental for their wellbeing. Ethnic minorities experience more symptoms of PTSD and anxiety such as Latina women having significantly more psychiatric hospitalizations and anxiety following a rape than white women (Jacques-Tiura et al., 2010). Comparing the Caucasian group to African American, Hispanic, Asian, Native American, and American Indian groups exhibits a significant increase in mental health disparities because of societal hardships. Individuals across all ethnic minorities who do not receive professional help, often search for other ways to heal such as self-medicating. Cultural and societal oppression may lead to feeling shame, isolation, or a lack of safety that can negatively impact a person’s well-being and deplete their coping mechanisms in a crucial moment of crisis.

You Are Not Alone 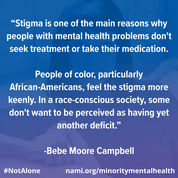 The structure of the mental health services demonstrates insufficient resources of culturally appropriate services that may help to serve the minority populations regarding sexual assault. By recognizing the need for awareness for ethnic and cultural differences of rape survivors, society will be able to adequately prepare to respond to the needs of sexually abused women identifying as a minority with a mental illness. By standing together, we can envision a nation where any individual affected by a mental health disorder or a sexual assault have access to the appropriate support and quality of care to live healthy and fulfilling lives. ZCenter strives to offer a place where no one feels alone in their struggles.

Jacques-Tiura, A. (2010). Disclosure of sexual assault: characteristics and implications for posttraumatic stress symptoms among African American and caucasian survivors. Journal of trauma & dissociation : the official journal of the International Society for the Study of Dissociation (ISSD). https://pubmed.ncbi.nlm.nih.gov/20373205/.